My driver Dominic suggested that I visit The German Bakery for a snack and a break before the program began.   While the bakery is supposedly cool and trendy, I found it to be dark and unwelcoming.  There was no process for ordering, paying for and receiving food.  I was given my salad at the counter but then later had to come back and search for the hot sandwich that had to be cooked.  I almost didn’t get my tea at all.

When I left my table to get my meal, a big guy with an “Alabama” T-shirt took my seat.  I came back to the table and squeezed in next to him as there was not really any other place available.  He and I began to talk. When I mentioned that I was a filmmaker and had been to Montgomery, Alabama to work on a film, he disclosed that he would like to be an actor and he had even been an extra once.

Since he didn’t look like the kind of person who would travel out of the state, let alone to India, I was interested to visit with him.  I always love when people look one way and then you discover that they are another way.  I am thrilled when stereotypes aren’t true.  I love being reminded that we are all human and each of us is shaped uniquely, after all, I am misjudged constantly because of what people think about my hair, my skin, my eyebrow ring and my nationality.

He was visiting a friend and was a bit overwhelmed by the newness of the country.  I was still taken and entertained by the newness and working to discover my home in it.  When he went to see about his order, a black guy came over.  He was from the Caribbean and thought that I was as well.  He was a DJ and had lived in Pune for 10 or more years.  He gave me his card and seemed very at home in his life there.

I sat quietly eating my fries and thinking about my impending meeting with Mr. Iyengar.  I had waited for this day for a long time. I have wanted to be near this man and now finally, I am in his town, I am only a few hours away from something big.  I am not nervous but I am focused.

Mr. Alabama returns with his food and immediately proceeds to have a huge, tantrum.  The eggs were not cooked the way he wanted and he is furious.  The meek Indian waiter is babbling his apologies while Mr. Alabama begins to insult the waiter, the restaurant and all of India.  People are looking up from their coffee and Chai and I am looking down.

The plate is whisked away with promises of a better dish and the tirade doesn’t stop.  Broad and insulting statements are hurled around and I am wondering what I’m supposed to do.  He is talking to me although he is speaking to all of the people in the café.  Frankly, I am insulted, afraid and furious that he is messing with the “yogic” vibe that I have been creating for days and months.  This is my home he’s criticizing.  These are my people, it’s not perfect but he has no right to offend it.  He should go home.  He should stay in Alabama if he doesn’t know how to appreciate a beautiful place like India.  He is not wanted here.  He is giving America a bad name.  He is the reason that we are often disliked.  I am reminded that just because it’s a stereotype, it doesn’t mean it’s not true.

The waiter is back with another plate of eggs cooked “over raw” or whatever he wanted.  He doesn’t know that “over easy” is not a term that is taken seriously here because no one can fathom eating uncooked eggs in India.  It’s just not safe.  He is given a big plate of “Salmonella” on toast and he digs in.  I collect my things and move to another side of the restaurant.  I cannot be near him any longer.  I need a shower.

It is still raining outside and the fiberglass roof is leaking.  Water drips from above onto my plate and I can see that I am not going to have the relaxing, soul searching, sit I was hoping for.

Back at the Iyengar Institute, people are arriving and crowding into the main room.  Yoga equipment is piled up along the side and the floor is covered with mats.  The room is a semi-circle and in the center is a low stage.  The walls are covered with pictures of Mr. Iyengar in various unimaginable poses.  I find a pillow and perch on the floor where I can see the stage and lean against a column.  There is a huge alter draped with flowers and like all of the other foreigners, I take photos.  The Yoga Teachers from Mumbai, sit on the side in the “’special” area they have created for themselves.  I don’t admire them today.  I feel sorry for them. 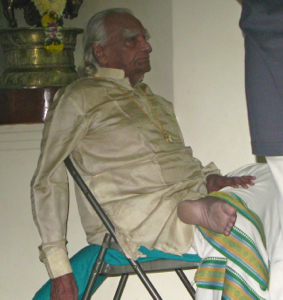 His grown children and grandchildren help Mr. Iyengar into the room and he is seated 20 feet from me.  He looks like his pictures. I know him well. I am the only me in the room.  There is no other black, dreadlocked, American woman.  I am open and sunny and my California cheerfulness oozes from me.  I have told the people who run the Institute that I have come from Los Angeles and that I am a student of Eric Small.  No one seems to care or if they do, they are not letting on,

I knew Mr. Iyengar was old, but he is really old.  He may not make it through the ceremony by the looks of it.   He is helped onto the stage.  We sing invocations and repeat prayers and it is beautiful.  The words are the same as in LA but there is no similarity.  Same words, different song.  It is almost unrecognizable.  Mr. Alabama fades from my consciousness as I am enveloped in the heartfelt, musical prayer.

Finally it is Mr. Iyengar’s turn to speak.  Before my eyes, he becomes his young self.  He is animated and full, bursting with ideas and philosophies about yoga and the uniting of body, soul and mind.   We all sit intently, hanging on every word.

I try to capture this power; to photograph, videotape and remember it, yet I know that I just have to be in it: let it flow through me.  All of the attempts to hang onto this moment are in vein.  Eventually, I submit and I listen.  I try to feel what he is saying through his thick Indian accent.  I can only pick out a few words in a sentence but I understand him.

When he is finished, he leaves.  Songs and prayers resume.  I am panicked because this may be my chance, my last chance to see him and have him know my journey and me.  He’s got to do something about this MS thing.  Certainly he knows that I am the wrong person.  I am good.  I am mostly, pretty nice and I treat people the way I want to be treated.  I have lots going for me; I am not supposed to have this disease.

They got the wrong girl.  There has been a glitch in the system.  Some bad guy is out there robbing banks and beating up old ladies and he was supposed to have the MS, not me.  Maybe his name is similar or maybe he was born at the same time in the same hospital.  There’s been a clerical error.  I’m sure Mr. Iyengar could straighten it all out if he just could meet me and see me.  They’ve got the wrong girl.  I have children and an unrealized career.  I have a husband and there are people who need me, who depend on me.  Somebody needs to talk to somebody and explain my position.  Someone who has some dap has to petition on my behalf.  I need Mr. Iyengar to pull some strings with the Gods.

I dash out of the room to find him.  I feel hectic but I remain calm.  I want to be my best self for him.

He has vanished and so I go to the bathroom and wander around the Institute afraid to go back and afraid to leave.

My retarded friend sees me and comes closer.  He offers me a seat and keeps me company.  After a while I go back inside.  I am told that Mr. Iyengar will be downstairs to give his blessings.  There is still a chance for me.

I line up behind the droves of people who have come to pay their respects and get blessings.  I wait patiently.  He sits high on a chair and he is 200 years old again.  I drop to my knees, I kiss is feet and I ask for his blessing but what I am really asking is for him to make it all better.  He puts his hand on my head and I try t soak it up. I try to really get all that I can from him.  I want to feel the miracle.  Before I am ready, it is over. Some other desperate soul takes my place and she knows how to kneel properly and doesn’t cling to his feet like I did.

I call Dominic so that we can head home.  It’s been a long day.

I say good-bye to my retarded friend and he walks me half way up the driveway. He gives me a flower and a smile.  I can tell that I am not cured.  I feel exactly the same and I am a little sad. 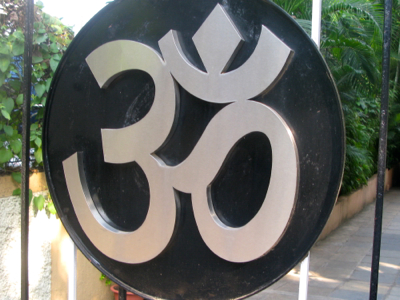