Yoga, Iyengar Yoga is truly one of the reasons I have come to India.  B.K.S. Iyengar helped to create this form of yoga so that all people, even people with neurological and other disabilities can benefit from the practice.  I have been studying it for the last year in LA and now I am coming to the source.

I haven’t practiced yoga since I arrived in India.  I feel like I don’t know where to start, how to begin.  I air freighted my mat, my bolster, 2 blankets, a belt and a block.  Good thing I air freighted the blankets because my boys have been sleeping under them since our arrival because we blast the air conditioners all night.  The rest of the supplies are on the shelf. The yoga shelf, the shelf that I have ignored since we moved here.

Finally, after weeks of searching and hiding, I went to my first yoga class at the Iyengar Institute in Mumbai.  It’s taken a while to find the right channels and I am learning that in India, it’s all about going through the right channels.  If you come in from the top, you’ll never have to worry.  If you come in from the bottom, you’ll rot there. 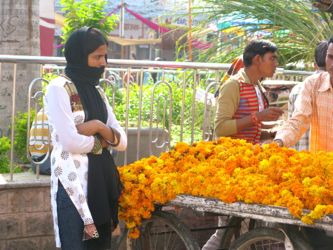 I left the house just after 6am and sped across town.   The city was stirring to life and it was beautiful in a way I had not seen before.  The streets were still slick with rain, mist or grease, most likely a combination of all three. They sparkled and glistened with the sunrise.  Bright orange flowers were heaped on the curb and being sorted by vendors as were the fruit and vegetables bound for the market.  Stalls were half open with yellow light seeping through the shutters and the air was still cool and damp.  The crush had not begun.

The Institute is on the first floor of a non-descript, cement building in the center of town.  There is a logo of Mr. Iyengar in one of his impossible poses on the window.  Inside, it was quiet.  I introduced myself and was told that this was a therapy class.  I explained that I had been invited and the man looked me up and down and was not impressed.  I filled out a name badge and wrote “Nandi – MS” and pinned it to my shirt.  He instructed me to wait for the teacher.  I waited in the corner as people poured into the room until a stern, thin woman glided in.

The teacher was curt and no-nonsense.  There were no color-coordinated outfits and no lavender mats like mine.  Everything was practical and unfussy.  I realized that here this is a way of life, not something that Indians do for an hour, three days a week before a non-fat, soy, caramel macchiato after dropping the carpool off at school.

I joined in feeling out of rhythm with the class and a bit taken aback by the teacher’s tone.  This is not touchy-feely Beverly Hills yoga or even gentle, groovy Silverlake yoga. “When I say straight, I mean straight” the teacher barked.  Everyone complied lest they be whacked with a ruler.

At one point we were given a position that I was not familiar with.  “They don’t do this asana in Los Angeles?” an assistant asked.  I didn’t want to speak for the whole of LA or even my class, but that was too complicated to explain so I just shrugged and tried to look enthusiastic.

The assistants strung up some ropes and I was instructed to climb on and hang upside down like a bat.  It was quite a beautiful pose and it seemed to defy gravity.  “How does that feel?” the assistant prodded. “Good.” I squeezed out because I wasn’t going to say “Awful” or “How do you think it feels?”

After the initial shock of being strung up, I settled in and could begin to see that if I ignored the numbness in my pinched legs or the blood rushing to my head, it was quite relaxing.  I was told that the position provided room for my spleen.  I’m all for that.  I hung upside down for a while and then managed to flag someone who was walking by to get me down before I passed out.  There are two reasons why they don’t do this asana in LA: Law Suit.

All and all, it was a good class.  One of the women who was getting back into her Sari in the crowded women’s room looked at my name tag and asked why I was there.  I said, “I have MS”.  “Menstrual Cycle?” she asked.  “No”. I mumbled as I rushed for the flooded toilet.

The Institute sold me a book I’ll need to study and some tights so I can’t hide my trembling, bent knees and they made a plan with me to come back in 10 days after the current Hindu festivals have finished and just before the next ones begin.

I have this fantasy that our family will practice yoga every Sunday morning.  We will have strong lean bodies and we will be able to put our hands on the ground and do Downward Dog and all sorts of yoga moves without trembling and falling over like I do now.   We will stand tall and walk gracefully and we will know ancient secrets about breathing and living.

Mr. Iyengar is nearing 100 years old and I want to see him soon while I’m intact and while I have my medication from America left.  I have to find him while I’m still optimistic, while there’s still a chance.  I need to be near him and have his blessing.  I want to know what he knows and have my body do the things that remind people of the things that he does.  I have to understand his teachings and be one with myself or whatever I’m supposed to be.

Mr. Iyengar is in Pune (pronounced Pooh-nay).  Pune is a three hour drive away from Mumbai, up in the mountains and I hear that it is a bustling city.  There are trains, buses and my car to get me there.  I just have to figure out how, when and where.

My yoga teacher in Beverly Hills, Eric Small, specializes in making this type of yoga available to people with neurological issues.  After his own MS diagnosis 57 years ago, when he was told he’d be in wheelchair within 10 years, he came to India and found Mr. Iyengar.  Now Eric Small is 77 and he walks like a God.  I’m going to do what he did.  I will not sit back and wait to be consumed by this disease; I will not be a doorstop.

It’s not that I don’t get that this scenario resembles the whole Wizard of Oz thing; it’s just that in this case, in the case of my life, I have to believe that there is some all-knowing Guru who can make everything work out.  And I know that I’m probably the change I seek and that everything I’m looking for I already have, but I’m not sure how those grains of wisdom make it okay, late at night when I’m alone and scared.

I am still not up to believing that I’m just a sitting duck, waiting for one of my brilliant doctors to come up with the cure they say is just around the corner.

I’m sure that if I look it up, I am in the “denial/anger” stage of the disease.  But guess what, I don’t want to look it up.  I want to meet Mr. Iyengar and have him touch me and heal me and I want to walk like a Goddess.

I am going to Pune soon for a celebration of Mr. Iyengar’s life. I’m going to meet him to ask for his blessing.  I have to believe that he has the key and he will help me be whole again. 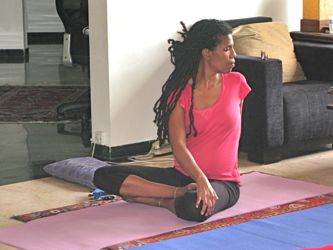