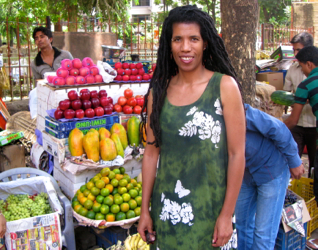 With the exception of the apple pie I just made and the Brownie Sizzlers I am going to have later tonight, I may be becoming one of those people I dislike even more than the people who yell “Woooooo” really loudly all the time. There is a chance that if I remain unchecked, I may become a “crunchie”, “granola”, “raw food”, “can’t eat gluten”, “Namaste” type of girl.  Just the thought of it gives me hives.  Even up until last week, I would have bet two pounds of caramel popcorn that it wouldn’t happen, that it couldn’t happen to me, and now, it’s all looking a bit uncertain.

Rohit, the boys’ Kung Fu Sir, brought over a friend who does Acupressure.  He is a serious guy who only barely cracks a smile when I mention that he is ruining my life.  The fact that he is also an engineer fills me with mixed emotions.  I am glad that he is smart enough to have another profession and yet I wonder how he can be so young and seem to know so much.  This Acupressure guy has a theory that my food is rotting in my gut and that this process is compounding my illness.  It is my first instinct to strongly protest and while I would like to say that food is not rotting in my gut, it has been one of my prided advantages in India that I can last for days without going to the toilet.  The evidence for his argument is stacking up and even though I do appreciate my ability to avoid bathrooms in India, it can’t be a good thing to never take out the trash. 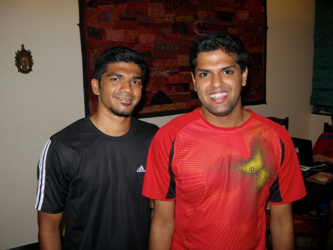 With that in mind, the Acupressure Guy has suggested a diet consisting of fresh fruits in the morning with a glass of warm buffalo milk, yuk.  Salads at lunchtime with more warm milk, double yuk and a dinner with boiled vegetables, more warm milk, lentils and other boring shit.  No bread, pasta, rice, basically, nothing I want.  And if you think that cow’s milk is bad, I can assure you that buffalo milk is worse.  When I told him about my lactose intolerance, he waved his hand with disregard and mentioned something about milk being the first food that a baby drinks.  I chimed in that buffalo milk was probably not the same as breast milk.  He ignored me and went on to continue to ruin my life by explaining that his diet plan does not include cookies, brownies or cinnamon buns.  In fact, he specifically asked me to avoid them as much as possible… propelling me into a spontaneous binge of all things carb and gluten for the last week.

He tried to get my memory foam pillow by claiming that it is too soft and that it impedes my circulation. If the pillow goes, he goes.  The pillow stays.  He gave up that one without much of a fight because he could see I was ready to fight.  I have to draw the line somewhere. Some things are worth fighting for.

Indians are hard core.  These people are not afraid to suffer and in fact, they find grace in it.  I haven’t achieved that skill and I’m not even sure that I want it.  All of my life, I have been working to have things that make me feel good. I studied hard, worked hard in order to have a life that I loved.   Why now would I toss that aside to be in agony?  Is that really the way to better health? The way to God?  Why would God create memory foam and Krispy Kremes if he didn’t want us to enjoy them? 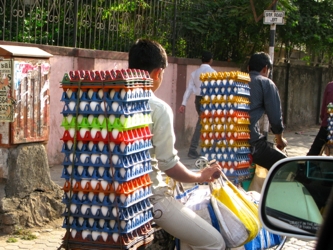 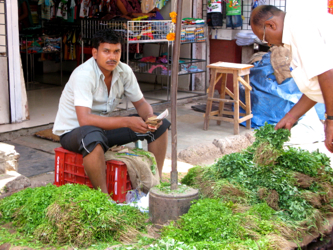 Before it was fashionable, in fact when it was extremely unfashionable, my mother had us eating home-grown sprouts, Bulgar and carob chips in the name of good health.  We would go down to the food co-op and get raw cow’s milk, whole wheat flour that still had the husks in it and brewer’s yeast.  We substituted granulated sugar with honey and raw sugar and we were told that we were drinking soda when she mixed mineral water and unfiltered apple juice.  My father stopped eating at home when she began with the whole wheat spaghetti.  It was a grim time.  I had natural peanut butter and organic honey sandwiches on bread that was the polar opposite of Wonder Bread.  Where Wonder Bread is white and fluffy, this bread was dark and heavy with grains and nuts in it.  There was no “squeezing” it without a vice grip.  No one lined up to share my lunch.  It’s a wonder I had friends at all.  Other kids had pre-sliced cheese food and I had uneven hunks of extra sharp cheddar.  They had bright yellow mustard and I had Grey Poupon (before anyone had heard of it).  I was a “Lunch Outcast”.

The only person who actually seemed to like my lunch was Debbie Moore, a huge 5th grader who was about 17 on account of being left back so many times.  Her lips were always cherry, lime, purple or blue depending on which flavor candy she was eating for breakfast.  Every day she would corner me and tell me that she would beat me up if I didn’t give her my lunch.  Every day, I handed it over.  So then I was really in a fix.  No lunch, no lunch money and a huge hunger headache. 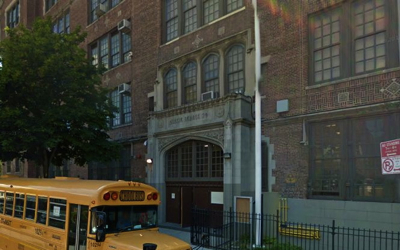 After school one afternoon, when my mother wanted to know why my head hurt, I told her that Debbie Moore had taken my lunch from me, that she was going to beat me up if I didn’t give it to her.  My mother quietly mentioned that some things are worth getting beat up for.

Debbie Moore came up to me the next day and told me to give her my lunch or she would beat me up after school.  I held onto my lunch and I said, “OK”.  I was too petrified to notice if she was surprised.  I took my seat at the table with the other kids and I slowly ate my sandwich on the dense whole wheat bread, my orange slices and drank my can of warm apple juice.  My stomach was in knots.  I felt sick. The music did not swell and I didn’t feel brave at all.  Some of the kids stayed clear of me.

Word of the thrashing I would receive traveled like wildfire.  “I hear Debbie Moore is going to beat you up after school?” I nodded.  A few kids offered advice.  A teacher said she’d let me out of my class early so that I could get home before the bell.  Someone else told me how to sneak out of the side exit, others reminded me to cover my face and take out my earrings so that she couldn’t rip my earlobes.  It was the longest day of my life.

When the bell rang at 3:00, the whole school poured out onto the sidewalk, next to the schoolyard, in preparation for the slaughter.  I walked slowly outside, reminding myself, convincing myself that, “Some things are worth getting beat up for.”  I might have believed it if I had had a ham and cheese sandwich on hero bread like my friends did or a Philly Cheese Steak but at that point it was moot, in the next few minutes I would be beaten to a pulp for a lunch that I didn’t even like. I hoped it would be quick.  I took my place on the edge of the circle and waited. The crowd pushed and shoved to get ringside places.

At 3:05, some of the kids drifted home; still I waited, the crowd becoming more enthusiastic as they imagined the fight.  By 3:10, more kids left and by 3:15, almost everyone was gone.  My best friend Stephanie and I eventually left at 3:20.  She gave me back the books and jewelry that she had been holding for me and we walked home silently.  Debbie Moore lost some street cred that day and, perhaps, I gained some. 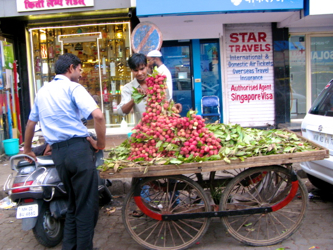 And here I am, a lifetime later, in Mumbai, in India, actually considering making my own peanut butter and eating sprouts on a regular basis.  Go figure.  I’ve already begun to start my day with fresh fruit and to eat less refined flour.  I have stopped buying white rice and so much pasta and my children are rolling their eyes when I talk about empty calories and digestion. It just doesn’t seem fair that we have to turn into our own parents and then be the parents our children resent, but who am I to break the cycle?

As for Debbie Moore, she’s probably graduated from 5th grade by now.  And I have to wonder if it’s possible that she knew the thing that I am only just learning, that organic foods can make a difference to a person’s digestion and overall health.  Could it have been that Debbie Moore was so committed to her colon that she was willing to fight to preserve it?  Perhaps she lingered in the 5th grade year after year to help me appreciate the good deed my mother was performing by inspiring me stand up for my healthy lunch.  Or maybe for Debbie Moore, my “healthy” lunch was better than no lunch at all.