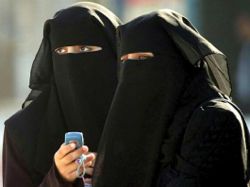 I wanted to look respectable, like the kind of woman Indian and Middle Eastern men would want to help and not spit on.  After a small discussion between my father-in-law, who had served as the British Ambassador to Kuwait, Zimbabwe and Thailand, my mother-in-law, who has an extraordinary people sense, and me, the long dress was chosen.

My father-in-law thought it didn’t matter because for him, Sir Ramsay Melhuish, it probably doesn’t.  He’s obviously never been an African American woman trying to get back into America or through customs in England. It isn’t all apple pie and baseball for us. There was going to be plenty for those Hindus, Muslims and Orthodox Jews to look at, they weren’t going to get a chance to whisper about my hip-hugging, sexy, ripped-knee jeans, too.

I had been dreading and anticipating this day for months.  We got to the airport three hours early and we could have used another hour.  We weren’t going to have any time to eat our last dose of yucky airport and Western food at Fuddruckers or peruse the duty free.  We rushed from one uniformed guard to the next with three trolleys and all the other add-ons.

It took everything we had to maneuver through the throngs of people.  My 12-year-old son Khari wore his guitar, Addae, my 14-year-old son, wrangled my 4-year-old son Taj and, as we all tried to steer the weighted down carts and not smash into too many people.

A sweet-faced Indian airline attendant pointed us to another long line.  Under other circumstances, I might have tried to play down the luggage.  This was too much, beyond even my capacity to feign surprise when the needle on the scales went into the red and then broke.

What do you bring when you move your family to India and your shipped belongings won’t arrive for two months?  What do you take to a country you don’t know, in a land you can’t imagine?  We were arriving in monsoon season, whatever that means.  The weather was about 33 degrees Celsius everyday.  I know that 37 is body temperature and I know that zero is 32 degrees Fahrenheit but basically, I couldn’t calculate anything in between.  What do you bring when you don’t even understand the weather report but you know it’s going to be intense?  I brought everything.

When it was time to move out of our house, I sent the big kids to my husband Robin’s family in England for a few weeks.  In my mind, one of the big benefits of moving to India is being able to see them more often as we travel back and forth to the US. I figured that it would be impossible and too emotional to organize and pack up while the boys tried to visit with friends, go to amusement parks and have sleepovers. As it was, the boys were only up for going to India because they didn’t have another option. The holiday in England eased the transition of leaving Los Angeles and provided the grown-ups room to do the hard work while Taj was in preschool.

Robin had left LA for India a couple of weeks before the rest of us to begin to sort out our apartment and living arrangements. There was no air conditioning installed in the apartment, no curtains and only rudimentary, temporary furniture.  Someone had to make it all okay. “Get the pest control people in,” I pleaded.  I knew that if India was going to work out, the pests were going to have to be controlled.

At the airport in London, dangling from my neck (separate from my passports) were the fifty US dollars I had gotten from jars of change I had cashed in at Ralph’s Supermarket in LA two weeks earlier.  I mentioned to the airline attendant that my bags were too heavy and asked her what I should do.  She said that I should see what happens.  “Wow.”  That was an un-American and radical response.  “Fair enough,” I thought.

Around my neck in the airport that day, I also had the forty-five Pounds Sterling that my in-laws gave us and my Amex card.  At this point, I was all in.  It was out of my hands.  There was nothing I was willing to leave behind, I had purged more than one person can be expected to purge in two months and now the only thing left to do was submit.  If that didn’t work, I was willing to beg for mercy, pay in dollars, pounds or American Express. 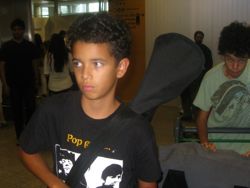 The line for check-in was so long.  It was already nighttime, and Khari was impatient.  “You will learn patience during this trip, one way or another,” I hissed. “So suck it up!”

I, too, have been learning patience and I am sucking it up on a daily basis.  Sometimes, I suck it up to the point of choking and other times it goes down easy like hot chocolate on a crisp night.  That day, we were all gagging.  To feel the sadness we had pushed down, the excitement that was bubbling over and the exhaustion that consumed us would have been too overwhelming.

Addae was already sucking it up.  He’d caught a cold and he’d been sneezing and moaning all day.  His grandfather took him aside to give him the lecture about rising to the occasion, getting through customs and I don’t know what else, but when Addae emerged from the room he was taller and noticeably less sick.  We took his temperature, no “flu” yet. Assuming they let this circus and the luggage on the plane, we were flying that night.

People kept asking what I thought about the move.  Frankly, I couldn’t think past Heathrow airport Immigration.  India couldn’t be harder to navigate than this lot.  I hoped we didn’t have “Swine Flu” and I hoped they didn’t confiscate my food or my Tommy Hilfiger lotion. It was the only thing standing between me, deodorant that doesn’t work, and my sanity. 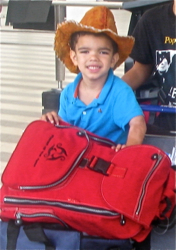 The airline attendant made friends with Taj and pledged to help us.  If you don’t have a first class ticket, a cute 4-year-old with a leather cowboy hat may be your only way past the luggage scales.  He was irresistible, smiling, giggling and being as charming as ever.  He must have overheard the “Rise to the Occasion” lecture or just sensed how much we needed him on our side.

We were late to check in since I couldn’t do it online with the kids.  The sweet attendant ended up helping us get better seats and treating me like a friend. We had no excess weight, perfect seats and hot towels for all.  India was pretty great so far.

The attendant told me that God would help me; I could see that she was right.  She said that when I am in India, in the temples, churches and mosques, I would feel God’s beauty and his blessings.