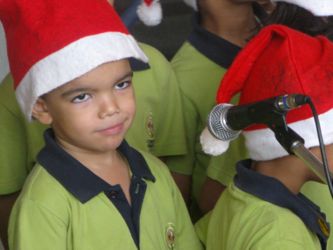 Today, without warning, it is gone.  I am alone in my world, forced to exercise, mother and commute without my companion.  It is a hard pill to swallow during our already tough Christmas.

Like all of the other electronic devices before it, one minute all was well and then, with a quick burst of smoke and a lingering stench, it was toast.  Singed beyond repair.

The Xbox was next and that was just a bad combination of enthusiasm and lack of knowledge.  Plugged in by a friend who has never used an Xbox or an American appliance… more than once.  The smell hovered in the room for most of the day and the games crowd a shelf they will become dusty on.

Khari’s guitar amp was working fine.  It was plugged into the transformer and all seemed well.  Why then did it suddenly fizzle and blow out?  We still don’t know.  It’s probably something to do with hertz and amps and wattage and other physics I don’t understand.  Either way, we are slowly and surely killing all of our precious electronics and before long, we will be the proud owners of a bunch of 220 amp appliances that we will then have to systematically blow up when we return to the States. 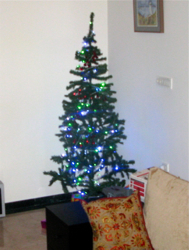 It’s not just the item itself that we are missing; it is the whole thing, the bits of ourselves that help us remember who we are and what we like to do that are slowly fading away and in some cases, as in the case of my iPod, replaced only with silence.

My friends write less often as the space that our friendship occupied is filled with others.  As we settle into our lives here, they too settle into life without us and we are the ones left missing.

Christmas draws near and for most natives is only an opportunity for a day off or a bonus and we are filled with the emptiness of being far from home.  I bake cookies with mismatched ingredients in a forlorn attempt to make the house at least smell like the holidays even though the constant drumming and the 85 degree weather suggests otherwise.

I went out to get a tree and ornaments.   Eventually, after hustling and bustling through a mostly Muslim part of town that specializes in Christmas decorations, I came away with our first ever tree in a box and some tacky flashing LED lights to go on it (220).

I dragged the box home and felt like tossing it on the floor in a heap with all of the other failed attempts at making this place seem like we belong but I mustered the enthusiasm to present it as a gift and enlisted the big boys in the task of building it for Taj.  Boys love a project, even when it doesn’t require glue and a hammer.

That’s the thing about kids; they can make fun out of anything.   They twisted each tasseled branch into the most realistic tree shape and then carefully placed the finished tree in the best corner of the living room.  They put the lights on the flashiest, disco setting and faked seizures when they watched it.

Taj was over the moon when he returned and after he cut a paper star with his newly acquired cutting skills, he was as happy as pie.  It doesn’t take much. 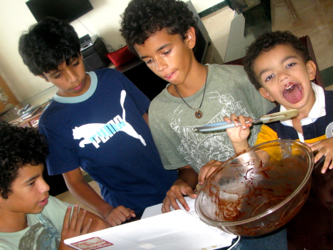 Khari is a people person.  One Christmas, when asked what present he wanted, he said that all he wanted was to spend time with his family and friends.  And he was serious.  That’s the tricky thing about him, he is not easily bribed or bought and so he is the most challenging of our boys.  It is for that reason that when an opportunity came up for him to travel with his new friend over the holiday, we jumped at it.  He would be better off with friends than hanging around the house being impossible to please.

Without much warning, Khari left for Delhi with his buddy for the entire holiday.  The family are Non-Resident Indians (NRIs) and have spent the last eight years in Japan. The kids, while Indian, are foreigners in India and the parents are taking the opportunity to show off the homeland.  Khari calls us daily with tales of failed attempts at skiing in the Himalayas and white water rafting instead.  They are headed to Rajasthan and towns and cities in between and I am forced to consult my map to keep up with the travels.  His calls help to remind us of why we are here in India.  What we are doing so far away from the people we love and the Christmas madness of LA.  We are having an adventure, or at least, we are watching Khari have an adventure.

I got Addae on board to help buy presents for Taj and we made our way through the empty mall in search of affordable gifts for the “almost 5 year old.”  I am pleased to say that a stroke of genius and desperation landed me in an aisle with three Nerf guns on the shelf.  I got all three.  Even though we had convinced Addae that his new backpack for his school trip was all he was getting and Khari that the trip to ski in the Himalayas was his present, it seemed only fair to add silly guns to the mix. 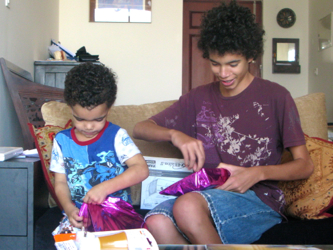 Christmas morning, I made homemade biscuits with cream that was labeled “fresh cream” but tuned out to be neither fresh nor cream.  We then moved to the tree and watched Taj rip into his gifts with complete delight.  I had snuck out and bought Addae a Hovercraft that he had his eyes on so that his nearly 14-year oldness didn’t weigh too heavily on him.

For the next two days Taj and Addae shot and fired upon each other and on us with their Nerf guns.  Addae immediately consulted the Internet to find out how to “mod” the guns to make them faster, more accurate and more dangerous.  As much as I could, I did my job as barricade, target and obstacle.  Even in the 85 degree sunshine, it felt a bit like Christmas.

The boys wanted to eat at Kentucky Fried Chicken for their “special” dinner and so there we were, lickin’ our fingers on Christmas in Mumbai at the local KFC.  Priceless. 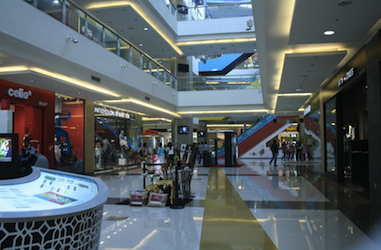 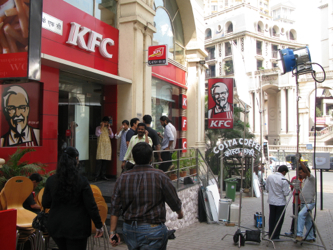 And because miracles are especially prevalent during this time of year, my iPod was fixed at the Mac shop during the Christmas Day trip to the mall.  We made the trip to give Taj time to play on the gigantic jumper, which was not too far from the Santa display.  After photos with “Santa”, a short, awkward Indian man in a bad costume, I sat on the side, listening to my music, while Taj jumped and jumped, feeling like I now had at least one of my missing friends from home. 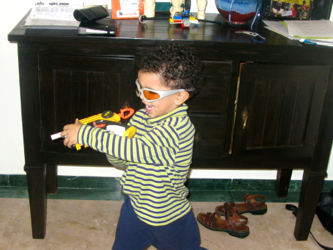 4 Responses to “Fried For Christmas #16”