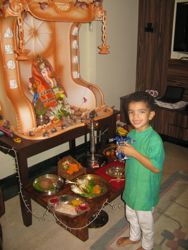 We took Taj to the hospital the other day.  He was getting thinner and quieter with every trip to the toilet.  It was past time for an expert opinion.

It was Day 11 of the yearly Ganesh Festival, the culmination of celebrations and worship that had rocked the town for days.  Lord Ganesh is the Indian god who is half boy and half elephant.  He is thought to remove obstacles and is very popular in Hinduism. 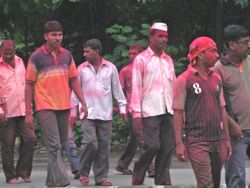 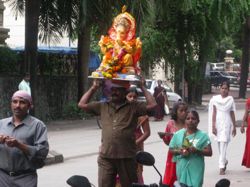 There was a hush over the city as teams of women, men, and children, with idols of Ganesh perched on shoulders, in rickshaws and trucks, headed across the road to Lake Powai for the Immersion.

During the Immersion, the idols are taken in to a body of water as far as possible and submerged with prayers and celebrating.  I am not clear about what happens exactly but I know that from time to time, children near the Arabian Sea have almost drowned during the process of getting these idols into the deep water.

An Indian friend gave me a Ganesh as I was leaving LA so I feel like I have a particular connection to this celebration.  I am not the green and unknowing tourist I appear to be, but rather, an Indian Resident with past knowledge and respect for Hindu culture.  Right.

We’ve been told that the city will be brought to its knees, tangled with traffic and chaos, drums and fireworks.  Sounds like normal, sans the fireworks and drums.  Everyone has gone home early either to dodge or participate in this event.  We are cheerful but foreign.

We head to the hospital against the flow of traffic with Taj and Khari, who is complaining of the same symptoms, but who really just wants to find out about his Typhoid shot since I’ve told him that the lake is off limits without the vaccination.

In truth, I’m just trying to buy some time as he is anxious to start fishing and I am worried about the two crocodiles that live in the lake that I know about and the five dozen that I don’t know about.  I have already forbidden Khari to bring home or even touch anything that he catches but, I know that I have lost this battle already.  At the end of the day, he is a boy and I’m a girl. 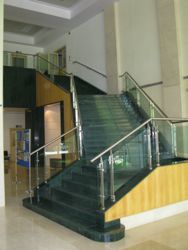 The Hiranandani Hospital is big and spacious.  The floors are marble and the rooms are vast.  There are huge windows and long marble staircases for someone like me to tumble down.  There are marble columns and uniformed personnel everywhere.  It is very peaceful, clean and orderly.  It is a private hospital, owned by the family who has built our neighborhood. 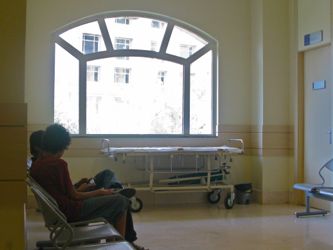 I am surprised by the lack of chaos in this place.  It reminds me more of a sanctuary than of a medical establishment. The hospital is public but expensive by local standards. There is no medical insurance to speak of in India and people are expected to pay for their services on the spot. There is also no state or city ambulance service. I don’t even want to think about what I’ll do if I need to call 911.  It doesn’t exist here.

It turns out that foreigners often use this hospital for elective surgeries, In Vitro Fertilization and for surrogate mother’s births.  As is common in India, foreigners pay a higher rate than locals.

We are told to fill out paperwork when we get to Pediatrics and we hunker down to begin the process.  Things are looking up.  There are televisions in the waiting room.

Before we can begin with the forms, we are told in English we don’t quite understand to “Do the paperwork later. The doctor will see you”. I can’t even comprehend what I am being told.  I have only been in the hospital for three minutes and I’m just expected to see the doctor?   I don’t think so.  I have a book, toys for Taj, and I have scoped out a good seat to watch a bit of TV.   It’s just not right.  I am expecting at least an hour wait.  I am counting on it.  We don’t have a TV at home yet and I have no sense of my world, Obama’s happenings, and the television culture in India. This is my chance to catch up. I’m not going.  I consider a sit-in or a tantrum but I take the high ground and calmly gather the boys and put back my props.

Reluctantly, we drag into the doctor’s office where he does doctor things, asks doctor questions, and chats on his cell phone when it rings.  A bit rude.  He gives us labs orders, prescriptions, and a card with his telephone  numbers so that we too, can call on his cell whenever we need to talk to him.  Okay, now I get it.  (Yikes, direct access to my doctor?  I am not sure I should be trusted with this privilege.)

It turns out that Taj has a common tummy bug and I am assured that he will get better as soon as he takes his medicine.  The doctor works from 9 am to 7 pm daily except Sunday and I am welcomed back anytime.  If we need to follow-up within the next five days, it is free.  (Free and available healthcare? being American, I am understandably suspicious.)  Now that we know where to go, we will all be back in the next few days to get our Typhoid shots.  Khari is already planning his first fishing outing.

We go back to the nurse’s station, fill out one page, and pay the equivalent of 20 US dollars for both boys and another four bucks for the medication. Then, we jump back into a rickshaw and go home. 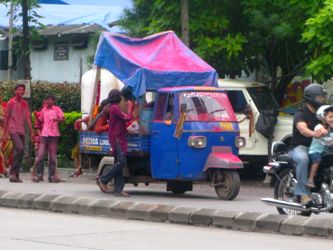 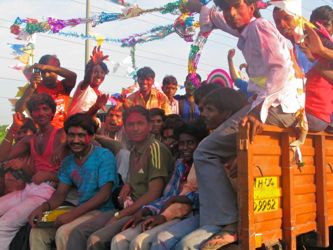 The streets are even more crowded as Ganeshes make their way to the water.  People are covered with pink powder and they flood the street merrily, oblivious to the afternoon monsoon showers.  We are soaked but peaceful, having just survived our first trip to the hospital. 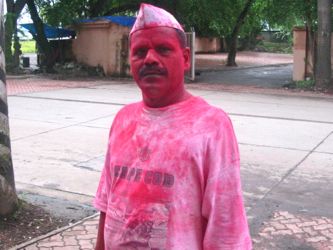