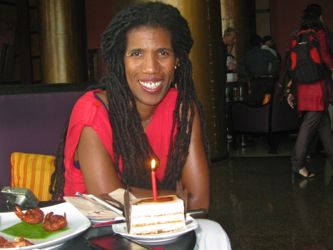 The boys are making me a birthday cake and because they are boys, wire cutters, banging, the Internet, and homemade candles are involved.  I think you can get candles in India judging by all of the shrines I’ve seen but, well, that would be easy.

Taj is taking a cooking class in school and thinks he is a chef. Every time I turn around he’s throwing something into an already cooking pan.  He keeps coming home with nasty things and he tries to make me eat them while he watches.

This whole birthday is an excuse to eat sugar and play with matches. He has done both tonight and I’m trying to figure out how I’m going to put an end to this phase before something goes up in flames.

I am running out of options and he seems to have gotten me this time because they all stare while I eat a big slice of the birthday cookie/cake.   In addition to being disgusting, it’s raw.

The birthday cookie/cake can only be described as a cross between paper mache and chocolate flavored glue.  We all agreed that anyone could make an edible cake but only a select few could make a heart-shaped pastry treat that looks tasty and isn’t. Taj and Khari don’t let the distinction stand in their way and they are back for thirds before I cut them off.  Khari’s always been one to appreciate his own cooking and Taj has always been one to appreciate what Khari likes. 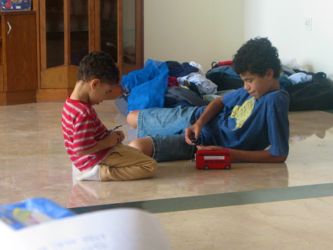 The boys are full of love for me and Addae mumbles that I am worth it but I sense a little remorse.  I later realize that he has been talked into contributing all of his allowance to get chocolate from the specialty store when he doesn’t even like chocolate.  He sits close to me and tells me what he told me when he was Taj’s age, “I wouldn’t trade you for anything.”  He is showing off his recently acquired sense of humor.  “Me neither,” I say.

I am impressed that the whole evening has passed and the boys have worked together, planned, and created without fighting, crying or spilling any blood.  It is a happy birthday.  We watch the sun set over the city and I still have tomorrow, my actual birthday, to look forward to.

New friends here want to know what I want to do for my birthday. I don’t mean to be a downer but everything I really want to do right now is on the other side of the world.

I want to go to the Pacific Dining Car in Los Angeles for brunch and eat crab benedict and drink a Mimosas. I want to walk on the beach in Santa Monica with a large Chai latte from the Coffee Bean.  Later, after a nap and a visit with the kids, I want to eat red velvet cupcakes from Auntie Em’s and go out for dinner at Palate in Glendale.  Then I want to go to the downtown Standard Hotel and dance on the rooftop and drink vodka and Red Bull until it closes.  I want to sweat and sing to old Prince songs at Funky Reggae Night and then hang out and laugh with friends.  However, Robin’s job here in India is having another gathering to celebrate the Hindu holiday, Navratri and I am invited/obliged to go.  So I guess I’ll do that instead.

I perk myself up and travel the hour and then some to Robin’s office in a neighborhood called Jogeshwari.  It is in the thickest part of Mumbai I’ve ever seen.  The buildings near Robin’s office are crowded with people who are inventing and using technology that is the lifeblood of American industry and the streets are packed with people and stalls selling almost everything a person could want. 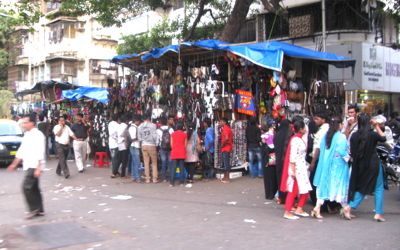 There are men perched on the sidewalk getting shaves from the makeshift barber while their wives search through the fresh fruits and vegetables for the evening meal.  There are stalls loaded with saris, hardware, fish, and items I can’t recognize.  It’s fascinating and dizzying at the same time.

It smells like shit in this neighborhood and I can’t figure out why until I’m told that there is an open sewer that borders the community.  It always smells this way and no one notices and soon maybe even I won’t notice.  I want to notice. I don’t want this smell to be normal.

Robin’s company, like so many others in this neighborhood, is full of young, college-educated computer techs.  I am the boss’s wife, and they don’t really speak to me although they can’t help but sneak peeks at me.  They are mostly dressed in traditional clothes in anticipation of the evening work party.   I sneak peeks at them and marvel at how they all look so festive and how they take this dressing-up thing so seriously.

The company is restoring films and there are clips of “Fantasia” and other American films up on the giant computer screens at their desks.  I feel at home and confused at the same time.  I know these movies, they are part of my history, but there is a sign in the bathroom to remind the employees not to stand on the toilet seats.  I don’t even know how to stand on a toilet seat.

Most of the workers don’t speak English and I don’t know what I’d say if they did.  Girls rush by with make-up and jewelry to continue their dress-up.  I am relieved to know that they work at being so well put together. I was beginning to fear that Indian women always looked glamorous without any effort at all. 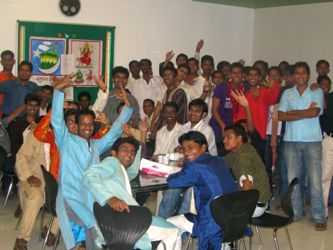 Robin’s officemate takes me around to introduce me.  There is a roomful of guys who smile and laugh from embarrassment.  I am embarrassed as well so I take out my camera for a group shot.  They forget that they are shy and begin to cheer and pose.  Now we are friends.

We make our way onto the roof of the building where there are speakers set up and a line of chairs for people like me. I’m not sure who is like me but I play along.  I sit and smile.  The sound system is good, and I appreciate the fact that if we are going to blare music into the night, it’s going to be on a good system.  In our neighborhood, we continue to be assaulted by loud music and bad singing on terrible systems.

It is a perfect night and the air is clear.  The smell of the sewer doesn’t seem as strong up here and the breeze is fresh.  The roof is lit for the party and excitement is palpable.  For one of the first times since my arrival in Mumbai, I can see the moon.

I have worn my long white skirt, purchased in desperation on Venice Beach before the move.  It was made in India and I paid 10 times what it would cost here if I knew where to go to get it, and I don’t. People keep posing behind me for pictures.  At first I feel awkward to be in someone’s picture for reasons I don’t understand.  I wonder what the caption will be.  “Picture with the boss’s wife”, “Picture with the smiling black lady” or “Let’s see if she gets freaked out now”.  Soon, I just hand over my camera so that at least I can have a copy.   Everyone’s smiling and I’m not sure why but I grin, too.

The acknowledgements begin and I am called up and presented a huge bouquet for my birthday.  Everyone who knows me knows that I hate carnations.  They are the worst flowers in the world.  They don’t smell pretty and they are the ones you get when the giver can’t afford to get flowers, doesn’t want to get them but has to or just has bad taste.  They give me a tower of carnations.

Somehow, these carnations are different; they don’t have the disgust and cheesiness on them that I despise.  These carnations are sweet and I am happy to receive them.   I feel a bit misty. I’ll even give a little speech if I’m asked. I prepare quickly to say how honored I am to be there and how glad I am to spend my birthday with them.

I am not asked to speak and the acknowledgements continue so I stand on the side with my cellophane wrapped flowers and wait for further instructions.  No matter, I feel touched and even interesting. I wave and smile some more.  Robin is nowhere to be seen, he is still working or hiding.

The music kicks off and the party begins. Everyone is dancing. 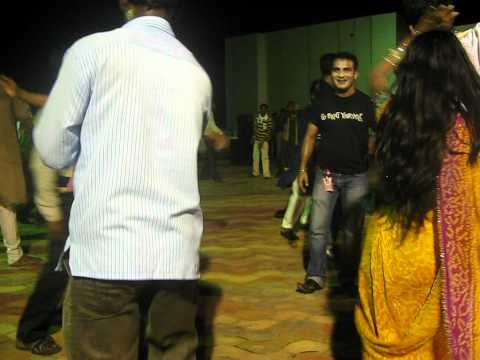 They go around in a huge circle and a helper places chairs to keep the circle wide.  I am dragged onto the dance floor and some guy tries to teach me the traditional Dandiya dance.  Just when I’m getting it, he does a fancy turn and I am lame again.

There is a dance with sticks and it’s organized and impromptu at the same time.  The guys have on their floor-length shirts called kurtas and the women have on saris, and other traditional dresses. They dance and move without hesitation.  Some people are barefooted and all are smiling playfully as they do a really cool version of the Hokey Pokey.

Robin is dancing now.  There’s no way he was going to get out of it.  He is perfectly out of sync with the circle and enjoying himself immensely.  I am so aware that I don’t know what I’m doing but I am happy and that seems to count for a lot.

The clothes are colorful and the hues of the silks and satins deepen as they get damp with sweat.  It is a Hindu celebration but people of all religions are here; everyone joins in.  There is no segregation when it comes to dancing.   Celebration in India is a group sport.

I have spent a good while on the dance floor and they won’t let me stop.  They videotape me and shake my hand.  This reminds me of every thing I love about the Super Bowl, Halloween in San Francisco, Howard University, Spike Lee’s parties, Marti Gras, and the Aerosmith video I worked on a few years back.  It is raw and pure party with no anxiety, no pretense, just fun.  It is everything I love about dancing on the rooftop of the downtown Standard in L.A.

“Swing your arms,” they say as they pass me.  I swing my arms and I jump to the music and I am transported.  I am in a Bollywood musical and it is amazing.