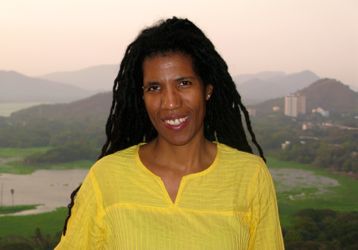 Today should have been a calm day. Instead, it was fraught with panic and turmoil.

It didn’t even begin like any other day; it was slow and hectic right at the start.  The 4-year-old wanted different clothes, the 11-year-old didn’t want to wake up, and the 13-year-old was just not moving.

There were three stomachs in varying stages of unrest.  Taj was just getting his appetite back and kept trying to eat things he shouldn’t and the others were nauseous and didn’t want to eat at all.

Being the Mom, it’s my job to make sure that everyone gets off to school having eaten what they should.  Already, 09-09-09 is getting the best of me.

We run out, half-baked, no change to pay for lunch, snacks in hand (after we run back for them), to our new car and our old driver, Francis.  It should be an easy morning.

By the time we get to school, Addae is down and Khari is at half speed.  The nurse suggests the school doctor for both and Khari is excused from class for the day.  He’s not even holding his head up at his desk.

Half way through the check up, Francis arrives phone in hand with an hysterical Robin on the other end.  He’s late for an important meeting I forgot about, and I am in the shitter because I’ve got the car.

I drag Addae out, leave Khari with rickshaw money, against Addae’s better judgment, and rush home.

It turns out that what seemed a reasonably sound decision at the time was in fact “wrong” and “irresponsible”.  And yet, when I think of all of the “wrong” and “irresponsible” things I’ve done in the last months, it pales.   For example, four people in the back of a rickshaw, moving my family to India, five people in the back of a rickshaw, Khari without a helmet on a motorcycle to see the lake with Francis, English food in England for four weeks, chicken nuggets and peanut butter and jelly sandwiches for six weeks, moving my family to India (again)… the list is endless.  I am overtaken with guilt. 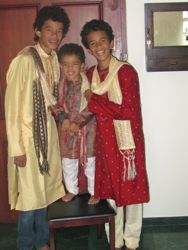 On the one hand, there are parentless children playing in the street and on the other hand, there is me, maneuvering, trying to use good judgment in the face of all of this messy, chaos and trying to live a life I can live with, work to be better, see deeper, and to leave behind art that inspires and uplifts.

Here I am in India, trying to grow boys who are smart, independent and life learners.  I am trying to groom young men who are world citizens and there are all of these contradictions – a world where a man stands, brushing his teeth on the side of a six-lane street while his neighbor pees out of a shack and his wife washes clothes in mucky water while his kids play in the same. There are stray dogs and cattle and feces and naked children just next door to a high-rise castle with balconies and servant’s quarters. 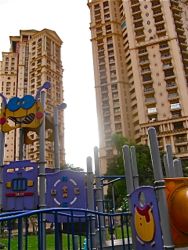 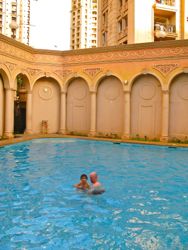 The castle has a playground, a gym, and a pool.   It has a school, a hospital, and a go-cart track.  Dry cleaning is delivered as are milk and newspapers.

Here, the children play cricket wearing Ronaldo soccer jerseys and newly tightened braces on their teeth.  They laugh and compare notes from top-notch schools where they train to become doctors, engineers, and bosses like their parents. They ride in air-conditioned cars and text their friends while the DVD player dazzles them with Anime.  They meet up at malls and coffee shops or go to private clubs for lazy afternoons.

I don’t want to walk barefoot through gross things and I don’t even want to smell gross things.  I like clean and tidy and orderly and I am not big on bodily fluids or creepy things. I carry a bottle of Purell and I’m not afraid to use it.  The life down below is unbearable to me and I don’t even understand how they do it, why they do it.  Why they stay there. Why I am lucky enough not to be there.

I am in between the complications of my privilege and the confusion of poverty’s reality.   Some people can sit in it, have their castle and enjoy it.  I am not as lucky.  I enjoy and love it, yet I feel somehow “wrong” and “irresponsible” in it.  Who am I and how do I fit into the world I live in?  How do I raise responsible children?  How do I find peace, make art, and live a life I can live with? How do I help to create a world that reflects our highest potential?

The Principal of the school gave me a “talking to”.  It ended up being a bit of a scene when my independent “world citizen” 11-year-old, who is new to the country and the school, strolled out of the building and jumped into a rickshaw.  Even the guard, who knew he should do something, but had no previous experience from which to draw, helped Khari flag down the vehicle and give directions (a fact that he later denied when it seemed that his job might be in question.)

I sat, listening to the Principal with my “serious”’ face on like the good parent I’m trying to be and I tried not to think of all of the martinis we’d shared two days ago at his wife’s birthday party.  It was a good thing that he’d brought my attention to my lapse in judgment because with all of the offenses I’ve racked up lately, this one didn’t even register on my Richter Scale.

Robin got to work and explained about the boys and the doctor and the traffic.  It turns out that our story is not that unusual.  This town is plagued with commuting mishaps and confusion.

All is again well in the castle. The sun is setting over Powai and the lake is calm.  From the 27th floor, the horns are faint and the sight of the Shantytown below is upstaged by the distant city and the stunning view.  The answers to my life questions elude me today more than ever.