My friends and family think I’m very brave to be here, to move to India, a place I’ve never been, a country I don’t know, on the other side of the world.  What they don’t know is how brave it would have been not to be here at all.

My Multiple Sclerosis diagnosis came during the Writers’ Strike and just before Christmas.  I was sad all of the time.  Prone to tears for no discernible reason and fragile beyond belief.  I didn’t know whether I was depressed as a result of the MS or just heart-broken by the sad news.

In an instant, I became too big for my life in LA and too small for it at the same time.  I was clumsy and invisible, suffocating and alone, plagued by irony and pain… at a loss for everything.  I felt like “scab” writers, desperate for ratings, were writing the story of my life.  How long could it be before I got amnesia or met an unknown evil twin? 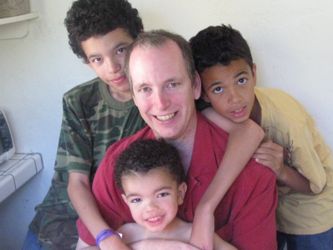 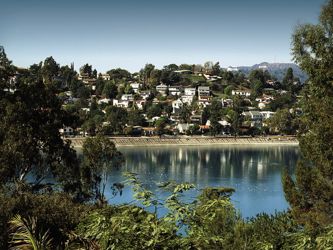 One day, when I was driving up Sunset Blvd, just past where Tower Records used to be, back when there were records, I found myself adding and subtracting, calculating and trying to figure out how much my life insurance policy was worth and how much life insurance I had on Robin’s policy.

I thought about Robin and how he’s a good-looking guy and a great catch.  We’ve raised nice kids.  They are warm and sweet and not too prone to anything objectionable.  They are smart and good-looking, just the kind of kids a stranger could grow to love.

We have a great house, in a neighborhood called Silverlake.   We bought in before it was cool and now we live in one of the most beautiful and trendy neighborhoods in LA.  It is quiet and convenient and if you were so inclined to walk to the stores or coffee shops, you could.  It’s near Griffith Park and Dodger Stadium and it is a community where people know each other, have lived there for generations and love it.

I thought about how if I got out now, my family would still be okay, they’d have each other. Maybe, in time, Robin would remarry and the boys would have a new mother.  This “New Mom’ would be younger and more fun and she would do all of the things that I don’t do.  She’d be patient, she wouldn’t tell mean jokes and she wouldn’t cancel Christmas on a road trip to Utah when everyone is whining about how long it’s taking.  She wouldn’t yell, “Because I said so.”  And, she wouldn’t help a four-year-old pack when he was running away to the neighbor’s house across the street.

The “New Mom” would ride on scary roller coaters with the kids and have belching contests.  She would wake up early with a good attitude and she wouldn’t fart.  She would snowboard and look great in a bikini on account of not having carried three huge babies herself.  For the same reason, her boobs would still be perky.  She wouldn’t kick toys under the sofa when company came over and she’d always have fresh-baked cookies in the jar.  I even had a few candidates in mind.

It didn’t hit me until I was almost at UCLA that I was having “thoughts of suicide”.  It seemed like such a practical solution, given the circumstance.  I’ve eaten enough sushi to know “honor” when I hear it.

After I munched down a Soy Joy power bar, I signed myself up for private therapy and at the same clinic I joined a Stress Management seminar for people with neurological issues.

In my group there was a guy in a wheelchair who could only move his head and his fingers.  He had a lot of personality and he kept showing off by doing donuts in his chair.   It was impressive, but then he got stuck spinning and we had to stand back until the teaching assistant was able to knock his hand off the controls with her notebook.

There was another guy who was also a quadriplegic (a “Quad”) who had gone in for routine surgery and somehow had a bad reaction to the anesthetic.  Now he was losing control of everything.  He had a marriage that was failing and a crap attitude.  There was also a young dad with MS who seemed fine but turned out to be a compulsive gambler and the facts in his stories never added up, so I figure he was a liar too.

I decided to sit next to an Indian guy who was a handsome man but a bit distant.  He was wearing an Obama T-shirt long before it was cool, so he seemed like a safe bet.

We go around the circle and start telling our stories.  The Indian guy has Tourette’s Syndrome and he explains about his first wife and how he didn’t really mean to hit her.  He talks about how his family found a second wife, after they paid off the first, and flew her back to Delhi.  Then, he explains about the second wife and how he really didn’t mean to hit her either, but how hard it was not to, because she was so irritating.

My eyes are getting bigger and bigger as he’s talking about one outburst he’s had after the next.  The therapist is calm and asking therapist questions about how it made him “feel” and all I can think is how stressed I “feel” to be within arms length of this guy.  I’m looking for the exit and changing the grasp on my pen in case I have to stab him right in the “O” of his Obama t-shirt.

He complains about the medications he was taking for his disease and the side effects, the impotency and the depression.  He tells us about how his company asked him to work from home because of his instability.  He explains about his “doctor” parents and his “engineer” siblings who he had burned bridges with.

Now, I’m even more stressed and sad, but I keep going to the seminar for all eight weeks because someone like me, someone who’s used to taking the bull by the horns, doesn’t just wait. Someone like me does something.  She doesn’t turn over her kids and her life to some perfect and annoying chick who was too neurotic and self-obsessed to have her own children and get her own life. She doesn’t just give up her balding husband and call it quits after breaking him in for the last 23 years.  And besides, someone like me, could take that “bikini bitch” (and you know who you are) because I fight dirty.

All that said, I make sure that I sit next to the “Quads” from then on. One thing I did learn is that there is no amount of my South Bronx or East Oakland attitude that can anticipate the scope and random nature of emotional instability caused by a patient’s chemical or neurological imbalance in the brain.